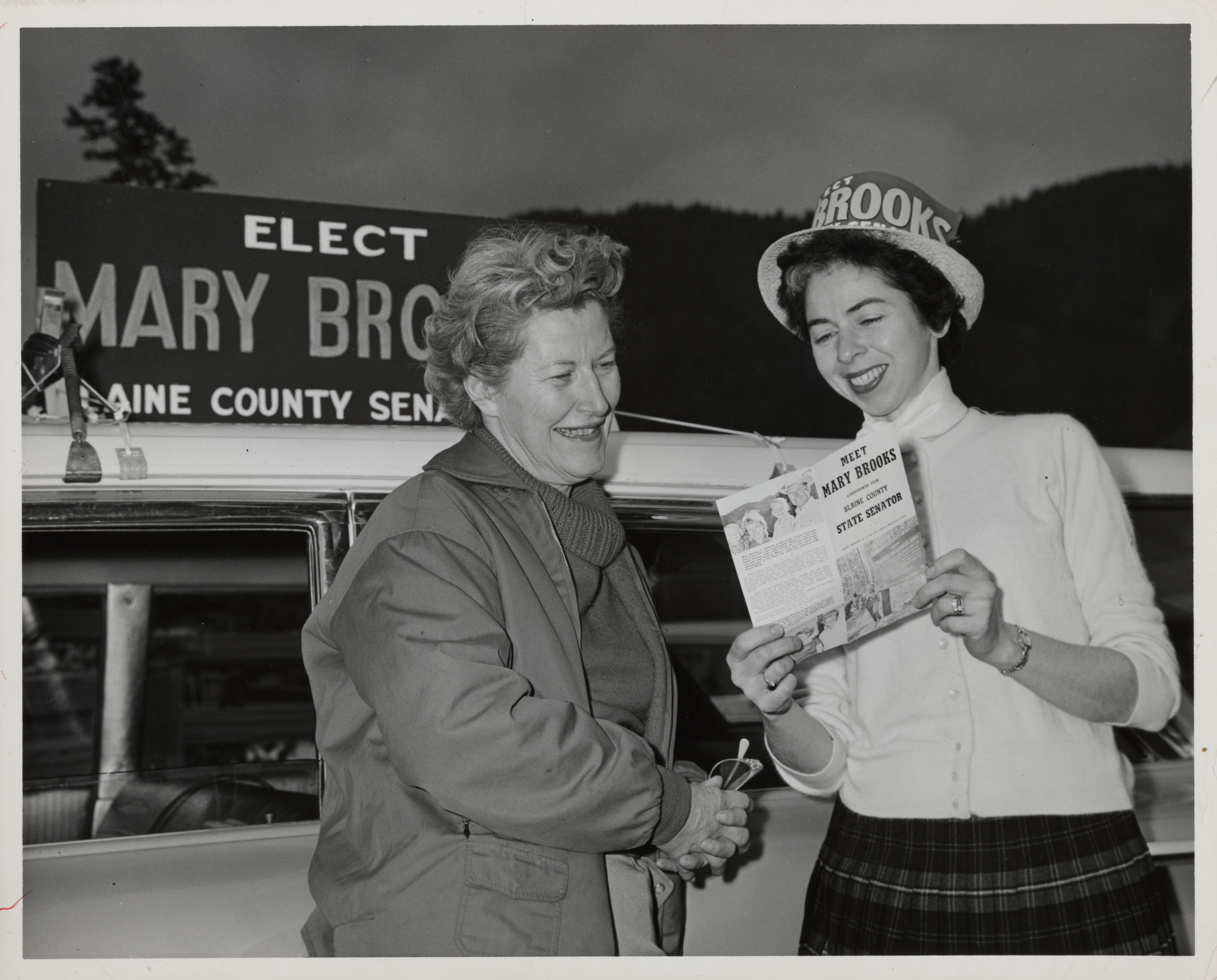 Since 1870, when six forward-thinking women formed Kappa Kappa Gamma at Monmouth College, the organization’s members have been making history.

The very founding of a fraternity for women was groundbreaking.

“We had not heard of any other Greek letter fraternity for girls at that time and always considered ourselves the first to be organized,” founder Mary Louise (Lou) Bennett was later quoted as saying.

The can-do spirit of Bennett and the other Kappa founders set the tone for future generations of Kappas who defied convention.

This exhibit highlights key events in U.S. history in which Kappas have been at the forefront, from the world wars and ratification of the 19th amendment to Vietnam and Title IX, as well as specific achievements by Kappas, including the founding of the Junior League and the Communist Party of the United States.


Nine Kappas pose during a scene from the pageant "Musical Vignettes" at the 1960 National Convention. The pageant illustrated the life of former Grand President Lucy Evelyn Wight Allan, and this scene depicts her time as the first Dean of Women of Stanford University.

Kappas participated in the fight for equal rights for women in higher education, with some serving in influential roles.

As Dean of Women at Stanford University -- the first such position in the country -- Lucy Evelyn Wight Allan, Beta Beta, established campus housing for women, a clubhouse, and an emergency loan fund. Her accomplishments were remembered in the historical pageant at the fraternity's 1960 National Convention, shown here.

Dr. Virginia Gildersleeve, Beta Epsilon, the longtime dean of Barnard College in the first half of the 20th century, advocated for paid maternity leave and access for women to graduate programs, and encouraged women to continue working after marriage.

Doris Seward, Delta, served as Dean of Women at the University of Kentucky from 1957 to 1966. She was also a member of the U.S. delegation to the World Confederation of Organizations of the Teaching Profession in the 1960s, started the Housemother's Training School for women training to be house directors and house mothers for Greek organizations, and served as president of the National Association of Women's Deans and Counselors.

See the details of the historical pageant portrayed on the left by visiting the item record here.

Against great odds, Kappas forged ahead in STEM fields, succeeding in careers that were traditionally dominated by men. Dr. Emily Dunning Barringer, Psi, was a pioneering physician and surgeon who became the world’s first woman ambulance surgeon, the first woman to secure a surgical residency, and the first woman accepted for postgraduate surgical study in New York City.

Astronomer Sarah Lippencott, Beta Alpha, was recognized with the Alumnae Achievement Award in 1966 for her work, which included studies of nearby stars in the search for extrasolar planets. After the 1982 death of her husband, Today show founding host Dave Garroway, Lippencott helped establish the Dave Garroway Laboratory for Depression at the University of Pennsylvania.

Astrogeologist Mareta West, Beta Theta, was the only woman to work on the Geology Experiment Team for the Apollo 11 mission. She pinpointed the exact landing spot on the moon for the lunar lander Eagle.

Volunteering in World War I


Beta Psi (University of Toronto) chapter members hitch a ride to the fields in a wagon at daybreak while doing war work on a farm during World War I.

With the outbreak of World War I, Kappas volunteered with organizations such as the American Red Cross and Canadian Red Cross, and filled positions in the workforce vacated by enlisted men. Canadian Kappas, such as the women of Beta Psi Chapter shown at left, were especially active in the war effort because Canada entered the war three years earlier than the United States.

Letters sent by chapters to The Key and printed in the October 1917 issue highlight Kappas' war-related activities.

“Registration postponed to give more time to those ‘doing their bit’ on farms,” wrote the Kappa chapter.

In the same issue of The Key, writer Dorothy Canfield Fisher, Beta Nu, described in a long letter the conditions in France, where she had moved with her husband and children in 1916. While there, she cooked in a training camp in the war zone for American volunteers and organized an effort to print books in Braille for blinded combat veterans. She also solicited contributions to a fund she set up to provide clothing for children in Bellevue- Meudon, a suburb of Paris.

“Think of yourselves as their far-away aunts, why don't you . . . ” she wrote. “Let's call ourselves the ‘Kappa Aunts of Bellevue’!”


A room full of female officers talk, smoke, and generally relax at the Service Women's Center in New York City, circa 1943.

Kappa Kappa Gamma was the first fraternity to open service centers for women members of the military. Organized and run by local alumnae associations, the centers were active between 1942 and 1946 and provided a “home away from home.”

Members of many other sororities volunteered to serve as hostesses in the centers.

Champions of Title IX and Athletics

Long before the 1972 passage of Title IX outlawed discrimination in any education program or activity receiving federal financial assistance Kappas had pushed to allow women athletes to compete in national and worldwide athletic contests.

Hazel Hotchkiss Wightman, Pi Deuteron, who dominated women’s tennis before World War I, founded an international competition in hopes of generating interest in tennis among women the way the Davis Cup did for men. The Wightman Cup, which pitted British women against American women, was played from 1923 until 1989.

In 1928, Betty Robinson Schwartz, Upsilon, won the gold medal at the first ever 100-meter track event for women at the Olympics. The inclusion of women in track and field was controversial.

These pioneering Kappa athletes would be followed by teams such as this one (left) from Stanford University, which won the 1992 NCAA Volleyball Championship with nine Beta Eta Deuteron Chapter members on its roster. See the item detail here.

Pioneering Kappas helped pave the way for the record numbers of women running for political office in the 21st century. Kappas also were trailblazers in public service.

Frances McGovern, Lambda, served in the Ohio House of Representatives from 1954-1959.

Barbara McDougall, Beta Psi, was a member of Parliament in Canada from 1984 to 1993.

Both the 20th and 33rd First Ladies of the United States -- Lucy Webb Hayes, an honorary member of Rho Chapter, and Lou Henry Hoover, Beta Eta -- were Kappas.

Looking Back, With an Eye Toward the Future


A group of Kappas pose together at the 2016 National Convention in San Diego, California.

Many of the achievements of Kappas would have been hard to imagine for the college students who, in 1870, created a fraternity to give women the same opportunities as men.

Fifty years before women earned the right to vote in 1920, could Minnie Stewart and her friends have envisioned that two Kappas would serve in the United States Senate in 2018?

At a time when the American railroad system was in its infancy, who could have dreamed that the United States would send a man to the moon a century later? And that a woman who had worn a Kappa key would play a crucial role in the mission?

As Kappa Kappa Gamma celebrates its sesquicentennial, a future filled with equal opportunities for women is expected. Many of the more than 240,000 women who have been initiated into KKG have helped pave the way for these opportunities – starting with six bold women at Monmouth College.